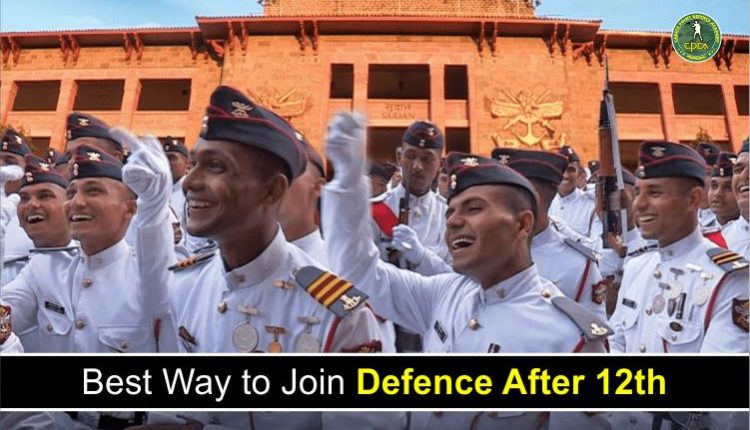 Ways to Join defence after 12th as an Officer:

These are the Best Way to join Defence After the 12th. The TES Entry is only for the Indian Army but through the NDA and NCC Entry, One can join Army, Airforce or Navy, etc. To apply for these vacancies, the age of the candidate should not be less than 16.5 years old and it should not be more than 19 years old. There is no relaxation has been given to any candidates regarding their caste, community or religion etc. The age Limit Criteria and educational qualification requirement will be completely the same for all. Here are the complete eligibility criteria required for each entry:

To apply for the NDA, A candidate must have physics, Chemistry, and Mathematics at 10+2 level and age must be under 16 years old and should not be more than 19 years old.

This entry is especially for the candidate who wants to become an engineer in the Indian Army. This is a technical entry while the NDA is an Open entry for all forces like Airforce, Navy, Army, etc. Let’s see the selection process and eligibility criteria for TES Entry.

NDA Entry or TES Entry, Which is better after the 12th?

There is nothing much required in the Eligibility Criteria section. There are two wings in the NCC (National Cadet Corps). The required eligibility criteria for both are different:

The selection of the candidates is based on the SSB Interview. It is mandatory to clear SSB Interview which is five days long and each day of the Interview will be different and a candidate will appear for the different types of activities and tests etc. The candidates will be shortlisted for the Interview through the Written Exam but for the NCC Special Entry, It will be done through the marks scored in the class 12th board.

Ways to Join Defence after 12th on Non-Officers Post:

A person must be medically and physically fit to join the service. A minor Medical problem can be a good reason for the rejection. If you have the aim to join the Indian Armed forces, make yourself healthy, active and fit.

Well, if you have any issue which is correctable, You will get a temporary rejection, where you will get some time to it. But, if you have any series of issues that can not be corrected, then you may be given permanent rejection. Click Here to get complete details about the Medical Criteria to join the Defence.  So, This was all about the Best Ways to join Defence After the 12th. I hope, you got the complete details about it.

How can I become a Clerk in the Indian Army?

The Selection of the clerks is done from the Soldier’s entry. You will have to appear for the Rally Bharti Recruitment.

What is the height required to Join Army?

If the candidate is above 162cm, he is eligible to apply for the Indian Army while for the women its 152cm.

Is there any written exam in NCC Special Entry?

No, there is no special entry in the NCC Special Entry, The Selection is done through the SSB Interview and the candidates are shortlisted for SSB on the basis of the marks scored on the 12th board.