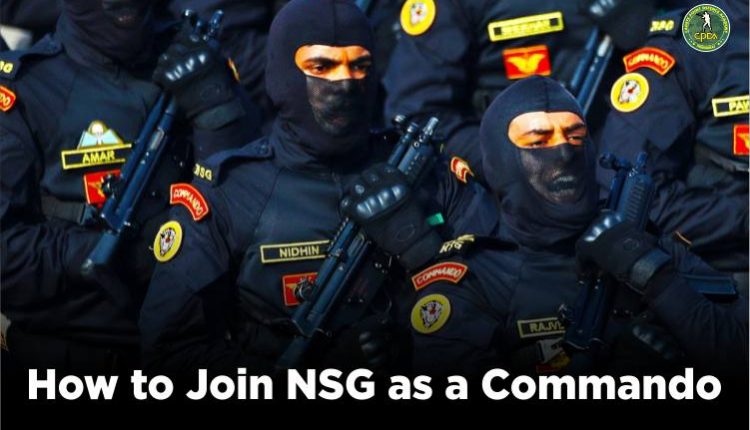 How to Join NSG as a Commando

They are one of the best and most highly trained soldiers. Professionals say on average out of 1000 Indian soldiers only one can qualify for the commando. But if you have decided and dreamed of becoming commando. Then it may be very easy for you. You just have to be passionate about your job. Here in this article, I am going to share with you the complete details about the going to share with you guys. how to join NSG as a Commando in India?

National Security Guard (NSG) was set up in 1984 as a Federal Contingency Deployment Force to tackle all facets of terrorism in the country. Becoming a commando in India is not an easy task. Read the article very carefully so that you can understand everything very clearly.

How to Join NSG as a Commando?

There is no direct recruitment. The recruitment for NSG Commandos is generally done by existing defence forces. So in order to be eligible to become a National Security Guard, one has to be a soldier or a trainee of a military or Para-military force.
Only those with excellent performances are considered for NSG. Besides, they should not have any red-ink entry, no criminal record and have no punishment record in the last three years of service.

In order to become a commando, the first thing which you have to do is join the Indian Army as a JCO (Junior Commissioned Officer) or CO (commissioned officer) or soldier after a few years of service you can apply to join NSG as a Commando. Here are some important facts about the NSG Commando and after that we will get to know about the complete process to apply for the application form.

The Process to Apply for NSG Commando:

The Selection of the National Security Guard Commando are done in multiple phases of selection and each phase has its own difficulty level. Here are some pre-defined stages that are mandatory to clear to join NSG as a Commando.

Only those candidates who finish the 14 months of training effectively are inducted into the NSG staff are sent for the advanced combat training to Israel. There are many composites of the National Security Guard Commando. Here are the details about that.

There are several groups in the commando itself. As per the training and performance of each candidate, one gets the group accordingly. Here are some famously known groups that are known as commando’s group:

Phantom commandos are selected for very high-risk situations where failure is not an option. The best of the elitist NSG are chosen and sent to an unrevealed location to train among the best and latest practices to make them live up to their name- PHANTOM.

There is no direct way to be NSG commando. Being an NSG commando is an opportunity only a few get. But you have a passion for that you should definitely choose your dream. They live for the nation and are like guardian angels who protect the country from unknown threats.

There is a number of operations performed by the national security guard commandos. It is not possible to mention every operation here. Here is the list of some operations for which the commandos are known to handle at ground level.

Well, It is not easy to join the NSG as a Commando. It takes alot to be a commando in India. the service of commando is also for some limited age and later on, they get back to Army wings, Airforce or Navy wings etc. If you are the one who wants to join NSG as a commando. prepare yourself from day one and keep chasing your dream. There is no direct way to join the service.

FAQs For How To Join NSG As A Commando

Is NSG part of the Indian Army?

No, National Security Guard is an independent organization that deals with the internal threats of the nation and also external threats as per the need. They are highly trained and perform tasks where losing is not an option.

What is the salary of NSG Commando?

How long is NSG Training?

The NSG trains the candidates for 14 months at different locations and in different weather conditions etc.

What is the age limit to join NSG as a commando?

Well, a candidate must be at least 18 years old and should not be more than 35 years old.

How to become an Officer in Territorial Army

Ways to get Permanent Commission for Women in Army