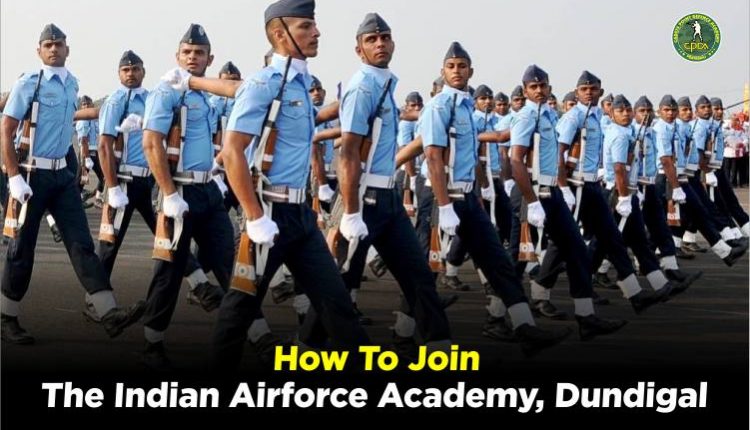 How to Join the Indian Airforce Academy, Dundigal

Indian Airforce is one of the most demanding services among youths. One can join the service after passing class 12th with science. Here in this blog, I will share with you the complete details about How to join the Indian Airforce Academy after the 12th. There are many opportunities to be a part of the service after passing class 12th as an airman or Academy etc. Here are the complete details about this shared by the CPDA (Cadet’s Point Defence Academy).

Indian Air Force (IAF) is a dream of many youths. Youths are inspired to join challenging and adventurous jobs. It takes a lot of courage and dedication to join the Indian air force and serve the country. Indian Air force is the 4th largest air force in the world with high technology and loyalty for ages.

How to Join Indian Airforce Academy:

There are some other opportunities as well but that is for the Airmen’s entry. So, here we will only take about the Indian Airforce Airmen’s entry. For the information regarding the airmen’s entry, Click on the article link given below:

As I mentioned above as well, That is the only way to become Officer in the Indian Airforce after passing class 12th. The way is through the NDA Entry. The NDA Stands for National Defense Academy. Let’s see the complete details about this:

You can join IAF through this exam which is conducted by UPSC (Union Public Service Commission) twice a year, that is in the month of July and December. One will have to clear the following phases:

Let’s see the required eligibility criteria required to appear for the Written Examination and then we will see the details about the SSB Interview and Medical examination etc.

After clearing the NDA exam conducted by UPSC, students will go to Air Force Selection Board which is located in Dehradun, Mysore, Varanasi, and Gandhinagar. The aim of AFSB is only to determine the potential of an officer in a candidate. Now, the selection is divided into two parts, which are as follows.

I have shared the complete details about this. A Candidate who has passed class 12th with Science is eligible to apply for this Entry. To clear this, One will need to prepare very well for the Written Exam and the SSB Interview.

FAQs For How To Join The Indian Airforce Academy

Is there any way to become an officer in IAF after the 10th?

No, The Minimum qualification required to apply for the officer’s entry is class 12th with science.

Can I apply for NDA with 12th Commerce?

No, One needs to have physics, chemistry and mathematics at a 10+2 level to apply for the NDA entry.

What is the salary of Airforce officers?

Right after the completion of the training, One gets somewhere between 54,000/- to 75,000/- depending upon the post and position etc.

How to Join the Indian Military Academy