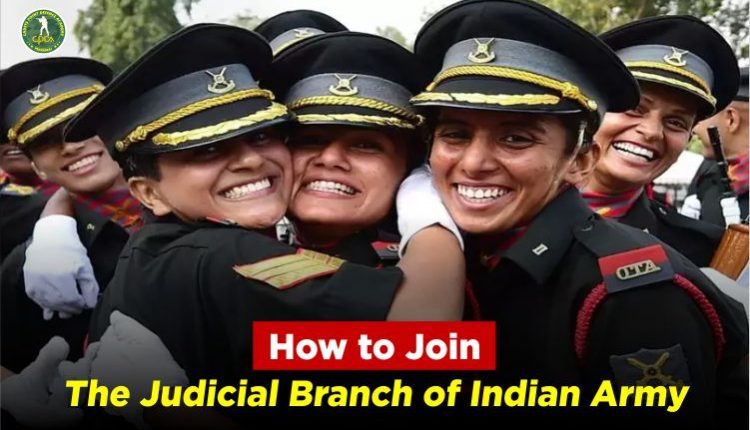 How to Join the Judicial Branch of Indian Army

Most of you might not know that the Indian Armed Forces have their own court and judiciary system. All the major and minor cases of the Armed forces are solved in their own court and judiciary. There are many vacancies released by the officials to join the Judicial Branch of the Indian Army Service. This vacancy is as simple as it looks. There are some required eligibility criteria to apply for the vacancy as well. Now let’s see the details about the eligibility criteria and then we will see the complete selection process etc.

How to Join Judicial Branch of the Indian Army:

The Indian Army has a number of departments within the service and the selection of the candidates are done through a separate vacancy. In order to join the Judicial Branch of the Indian Army Service. There is a vacancy released by the Indian Army named JAG Entry. The JAG Stands for Judge Advocate General. The vacancy is released almost every year. All the candidates who elect to apply can apply for this entry. Here are the details about the required eligibility criteria which are mandatory to have to apply for the vacancy.

Required Eligibility Criteria to apply for the vacancy:

There is nothing much required but make sure that you have gained proper knowledge about the law and judicial system of India. This is the vacancy where your knowledge matters alot more than your degree. Now let’s see the complete selection process to join the Judicial Branch of the Indian Army Service.

The Selection of the officers and other reputed posts entry is usually done through the Written exam and SSB Interview etc. But, Here is no written exam. A candidate will need to clear the three phases of selection which is consists of:

A candidate who gets selected as an Advocate will be responsible to provide legal help to the military in all aspects. So, make while appearing for the SSB Interview make sure that you are aware of the Military Rules and regulations. Most of the questions may be asked from that section. To know about the SSB Interview five days process: Click Here

For better preparation, I would suggest joining the SSB Coaching. Most of the SSB coaches have Ex-SSB Interviewers who are giving proper training and education regarding the SSB. You can join them to get trained well or there are also some online platforms where you can train yourself but it may be tough to learn online. It is tough to become an Advocate in the Indian Army. This post is reputed and most of the candidates try for this at least after the LLB.

If you have a defence background. It may be bot easier for you but candidates from non-defence backgrounds must join Coaching Institutes and get proper training. Youths are very passionate about their career in the Indian Armed forces. Competition is getting tougher day by day. Prepare yourself better.

The Salary of the JAG will be the same as it is for the officers. After the final Selection, the Candidate will be sent for training at the Officers Training Academy for 49 weeks (Approx 11 months). During the entire training. Candidates will get a stipend of 27,000/- per month. After the completion of the training, they will get a salary. They will also get all the allowances and other benefits like:

The starting salary in the service can be between 56,000/- per month to 72, 000/- depending on the job location and department of work, etc. They also get some extra pay and perks when working in dangerous zone areas. The Salary is awesome in the service. It is hard to get the lifestyle and pay as it is in the Indian Armed forces.

Upcoming Vacancy to join the Judicial Branch of the Indian Army:

Well, there is no announcement has been made on the Official Website of the Indian Army. the official notification will be released on the official website. Keep checking the website or follow the Cadets Point Defence Academy, I will also update you as soon as the vacancy is released.

FAQs For How To Join Judicial Branch Of Army

How lawyers are selected in the Indian Army?

What is the salary Offered to Judicial Branch in the Indian Army?

The Salary in the Indian Army depends on many factors. After the completion of the training. One will get a salary between 56,400/- per month to 74,600/- per month in the initial days.

What are the minimum age criteria to apply for the Judicial Branch of the Indian Army?

The age of the candidate should not be less than 21 years old while applying and it should not be more than 27 years on the date of commencement of the training.