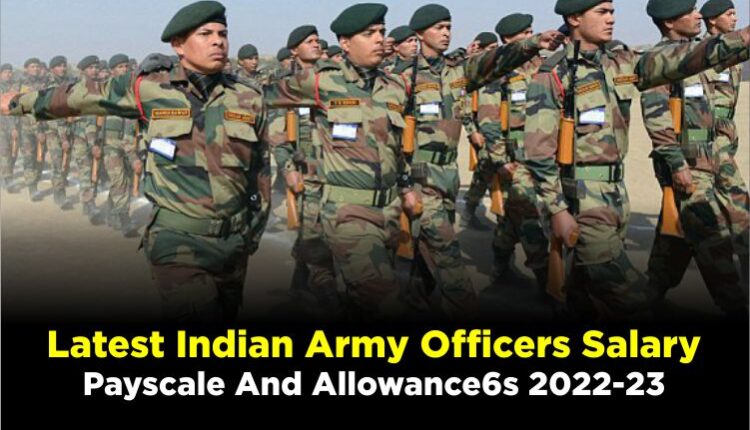 The Indian Army has a better life for you if you dare to join the Indian Army. The pay scale of an Indian army officer increased after the 7th pay commission. It is not only the pay scale but there are also multiple allowances for Indian army officers. As a matter of fact, the starting CTC for a Lieutenant would be approximately Rs. 70,000 – 90,000/- per month. Here in this article, we will get to know the complete details about the Indian Army Officers’ Salary and allowances for 2022-23 etc.

The 7th Central Pay Commission award, in many ways, has been revolutionary due to the active involvement of the environment. This was for the first time when we transited from Pay Bands to a Pay Matrix system. The method of awarding increments has been modified to a pre-calculated stage system in the Defence Pay Matrix, thereby ensuring uniformity. Several old allowances have been merged, some allowances abolished and new ones have been granted.

There are considerable changes in the payment structure after the 7th pay commission, as mentioned below. Being a Lieutenant in the Indian army at the age of 21 is a dream job for many. Let’s have a look at the pay scale of Indian army officers. 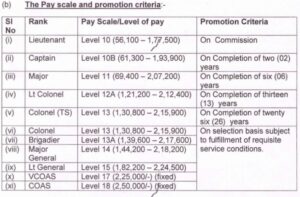 Non-Officers and Officers Pay Scale 2022-23 on a promotional basis:

The promotion from Lieutenant to Lieutenant Colonel is on a time scale basis and thereafter on a selection basis subject to fulfilment of requisite service conditions. The Indian Army officers salary, pay scale and promotion criteria are as follows: –

This is the Indian Army Officers Salary 2022. The rates of allowances applicable to officers are as under:

NOTE: In the case of allowances specific to Defence Forces, the rates of this allowance have been further enhanced by 25% as the Dearness allowance has gone up by 50%.

Cost to Company [CTC]: The CTC for a Lieutenant would be approximately Rs. 65000/- per month. This includes Basic Pay, DA, Grade Pay, Military Service Pay, Tech Pay, House Rent Allowance and Transport Allowance. These rates are not statutory and are subject to change.

This is the complete Indian Army officer salary and allowances that one gets in the Service. It keeps on changing after every 3-5 years. Hope this article was helpful to you.

Can I switch to officer entry after joining the army as a Soldier?

Yes, there are many ways to join the Indian Army as an officer after joining as a soldier. Click here to know more about this.

Are there any travel allowances given to Army Soldiers?

Yes, there are travel allowances for the Indian Army Soldiers as per the Government norms.

What is the minimum age limit to become an officer in Army?

A candidate must be at least 21 years old to join the army as an officer. The NDA is the only option to become Officer in Army at early age.