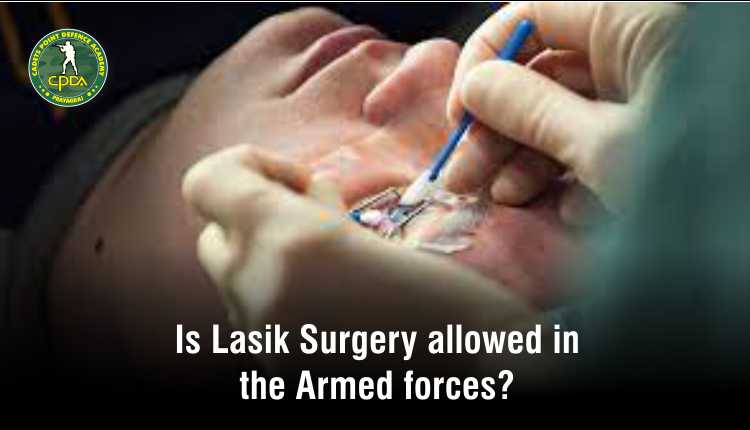 The Medical Exam in the Indian Armed forces plays an important role in the selection. Here in this article, we will get to know the details about LASIK Surgery, Is Lasik Surgery Allowed In The Indian Armed Forces? To get complete details about the LASIK surgery and what are the conditions when it is allowed in the service and when not etc. One must check the complete article below.

What is Lasik Surgery:

Lasik Surgery is simply an eye treatment, commonly known as laser eye surgery or laser eye correction. It is a type of refractive surgery which is used to treat patients suffering from myopia, HYPEROPIA, FORESIGHTEDNESS And ASTIGMATISM. This  Lasik surgery is done by the ophthalmologists who use a type of laser to give proper shape to the cornea just to improve the rituality. It is the alternative solution to eyeglasses or spectacles.

For a person who has thin cornea or high myopia, the LASIK surgery is not for that person. The National Institute for health and clinical excellence (NICE) collected pieces of evidence to prove the safety of Lasik surgery, NICE states that laser surgery for the correction of refractive errors is safe and beneficial.

What is a Regiment in the Indian Army and its type?

Is Lasik Surgery Allowed in the Indian Armed forces?

These are all the rules, regulations and conditions of the Indian Armed forces for Lasik Surgery. Now let’s see the Risk factors of having Lasik Surgery.

What is ACC Entry, How it is different from IMA (Indian Military Academy)

All the people who appear for the Lasik Surgery do not get the result they expected, there are also some shorts of side effects that may occur after the surgery.

These kinds of problems have been seen in very few cases. If you follow the rules of surgery you may not get these problems. It is very important to contact the best surgeon and have a proper conversation with the surgeon about your problems.

Most people don’t like to wear glasses all the time. After the LASIK surgery, One will not have to wear glasses. You can apply for the government vacancies that don’t allow glasses but there are some criteria for this, that you must check. Many people opt to appear for Lasik Surgery to join the Indian armed forces. Lasik Surgery is allowed in the Indian Armed forces but there are some criteria for this like: The surgery must be done after the age of 20. A candidate must have healthy eyes after the surgery. He/she should not wear any glasses or lenses to correct the vision.

FAQs For Is Lasik Surgery Allowed In The Armed Forces

Is it mandatory to clear the medical test to join the Indian Army?

Yes, there is no entry into the Indian Armed forces either its Army, Navy, Airforce or any other forces without a medical exam.

How to prepare for the Armed forces medical exam?

There are no magical tips or tricks for this. One just needs to eat healthily, exercise daily and sleep well. Try to maintain your BMI and keep yourself as healthy as possible. It is not one day process, it will take some time.

What is a medical test in the Indian Armed forces?

This blog was all about the Is Lasik Surgery Allowed In The Armed Forces?. I hope you got the complete details about this. To prepare for the Defence Exam, you can join the Cadets Point Defence Academy and get proper education and training about the exam, Interviews, Physical Fitness and Medical Fitness etc. You can check the official website www.cadetspointdefenceacademy.com to get details or to know more about the Institute.