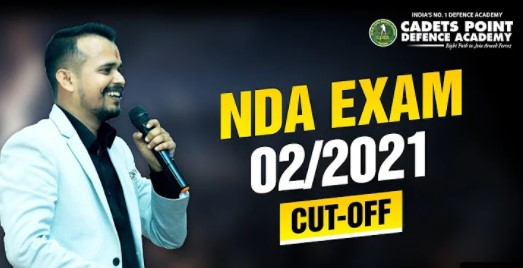 The Selection of the candidates in the Indian Armed Forces is done from the SSB Interview. It is a mandatory phase of selection. The shortlisting of the candidate for the SSB Interview is done through the Written Examination that is conducted by the UPSC twice a year. Here in this article, we will get to know the NDA 2 2021 Cutoff Marks, NDA 2021 SSB dates and How to prepare for SSB Interview, etc. Check out the complete blog to get the complete information about this.

The cutoff marks of any examination depend on many factors like the number of students who have appeared for the exam, the Difficulty level of paper and the total number of vacancies, etc. The Written Exam cutoff of NDA 2 2021 will be pretty much similar to the 2020 NDA 1 and 2 exams. Here below I have shared the last year’s NDA Written Exam cutoff marks. You may get an idea about this year cutoff:

As per the experts, The cutoff marks of NDA 2 2021 is not going to be more than 380 marks. Here are the expected cutoff marks details:

There are many coaching institutes that release the Answer key for NDA and for other defence exams etc. The experts of our academy (Cadets Point Defence Academy) has also solved the papers and has made an answer Key through which anyone can find the result of the NDA 2 2021 Written Examination. Click on the given link below to download the NDA Answer Key.

The SSB Interview is the toughest phase of selection. One must prepare at best for this. There is a number of students who clears the Written Exam but only a few clear the SSB. The Interview is tough also the competition is too much in this.

The number of Students Qualifies NDA Written Exam Every Year:

There is no official announcement has been made regarding the SSB dates but as per the previous records and some news sources. The Interview conducts within two to three months of the Written Exam. SSB Interview of NDA 2 2021 may conduct in the month of January or February 2022.

When NDA 2 2021 SSB Interview will be conducted?

The SSB Interview is conducted within 2 to 3 months after the Written Exam. It will be conducted may be in the month of January or February of 2022.

How many marks does one need to clear NDA Written Exam?

The cutoff marks of any exam depend on many factors like the number of students who appeared for the written exam, the total number of vacancies and difficulty level of the question paper etc. On average, If one scores close to 400 marks. There is a high chance that he/she will clear the exam.

Can I prepare for the NDA SSB Interview at home?

The preparation can be done at home but only if you have a complete idea about its process and procedure and have done it practically. If this is new to you. Join CPDA and get trained under the guidance of Ex-SSB Interviewer and officers.

What is Territorial Army India, How it is Different from Regular Army