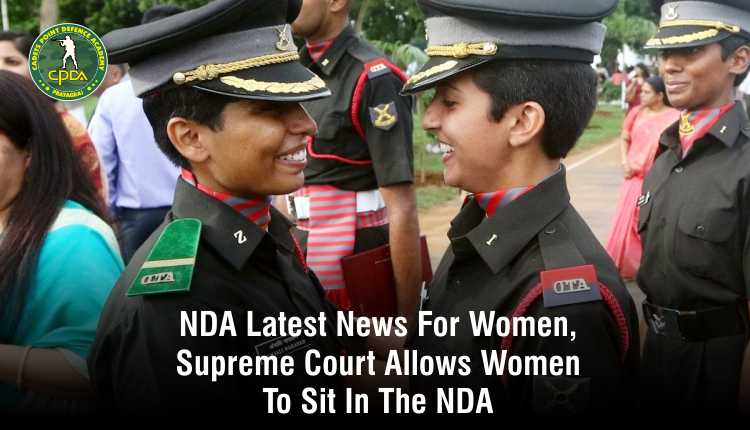 No violation of women’s rights, India’s Supreme court has now allowed Women to appear for the NDA Examination. Earlier only male candidates were eligible to apply for NDA and Women were allowed for other entries which are after graduation. Let’s see the details about this NDA Latest News for Women, See the criteria that are required for women to appear for the NDA 2021.

Supreme Court on August 18 (Wednesday) has passed an interim order allowing women candidates to appear for the NDA 2021 exam. This is for the first time that women candidates are allowed to appear for the NDA exam to take admission in the Army, Navy and Air Force wings of NDA and Indian Naval Academy Course (INAC). Supreme Court also said that the admissions will be subject to the final orders of the court. The matter will be heard again on September 8, 2021.

A bench of justices Sanjay Kishan Kaul and Hrishikesh Roy threw open the doors of the joint defence service training institute of the Indian armed forces to women cadets, directing the Union Public Services Commission (UPSC) to give wide publicity to the new advertisement on admissions so that intent of the order is translated into effect and more women apply.

Women can also sit for the upcoming National Defence Academy (NDA) examination and held that the policy that restricts their entry into the elite institution is based on “gender discrimination”. It also came down hard on what it termed the army’s mindset in providing equal opportunities to women.

While issuing the order, the court criticised the Army for not permitting women to take part in the NDA exam. When the Army’s counsel submitted that it is a policy decision, the top court said that the said policy decision was based on “gender discrimination”.

There is the three-level of exams that one has to clear to be considered for the selection. After the application, A candidate will appear for these selection phases:

This blog was all about the NDA Latest News For Women, Supreme Court Allows Women To Sit In The NDA. I hope you got the complete details about this. To prepare for the Defence Exam, you can join the Cadets Point Defence Academy and get proper education and training about the exam, Interviews, Physical Fitness and Medical Fitness etc. NDA Latest News for Women. You can check the official website www.cadetspointdefenceacademy.com to get details or to know more about the Institute.