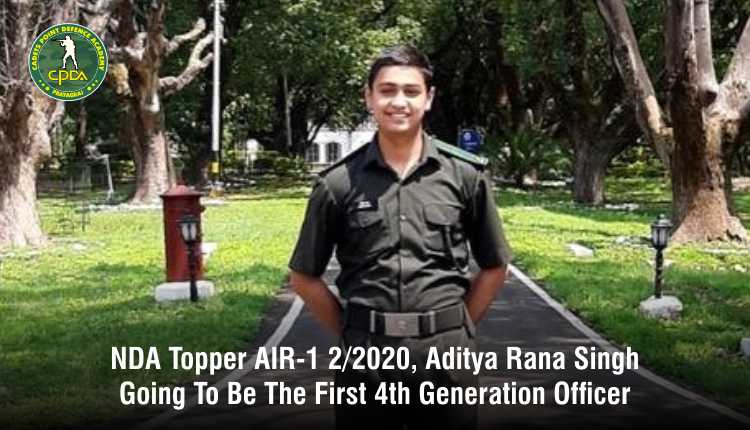 You may have many success stories, Here in this article, I am sharing with you the details about the NDA Topper AIR-1 2/2020, Aditya Rana Singh who is going to Be the First 4th Generation Officer. He has made an excellent entry in the defence. We all know that it is not that easy to clear the NDA Selection Process, One will have to prepare very better to beat the competition. Through the NDA entry, One can become an Officer in the Indian Army, Indian Navy or Indian Air force etc.

After the selection in the NDA, One will get trained for three years at the National Defense Academy and will get the basic training related to defence, Arts and acts of wars etc. After the completion of the training at NDA, A cadet has to select one wing that wings can be Airforce wings, Army Wings or navy wings etc. After the NDA the further training will be done at the respected wings for 2 years.

Mr Aditya Rana Singh has qualified for the NDA Selection phase and now has joined the national defence academy as a cadet. Let get to know some more details about Aditya Rana Singh and his words about his success.

Who is Aditya Rana Singh:

Aditya Rana Singh is an ordinary student who belongs to a defence family. He has recently scored the NDA AIR-1 2/2020 in the Examination. A total of 478 candidates have made it in the UPSC NDA 2 2020 merit list and Aditya Singh Rana has secured the AIR-1 with flying colours.

Aditya Singh Rana is an alumnus of RIMC Dehradun and going to be the fourth generation in Defence Forces. He believes that Rashtriya Indian Military College facilitated the required resource for all of us to prepare for the NDA exams and SSB interviews’, excels at academics, debates, journalism, and squash according to his mother, Jyoti Rana, ‘his inquisitive nature, ‘willingness to help others and self-confidence have shaped him to be the person he is today.

As I mentioned above that his father is Colonel in the Indian Army and posted in Army Head Quarter. According to his father, He participated in many Inter-School Quiz competitions. He was part of the Rashtriya Indian Military College Journalism club. Aditya is a good player of squash and hockey. He is also a good swimmer too.

His father would like his son to continue working hard and bring more laurels to the Country, his college, and the family. He strongly believes that Rashtriya Indian Military College has played a very important role in shaping the well-rounded personality of Aditya.

How to Prepare for NDA Exam. Imp Tips by CPDA

Well, As per the CPDA, It is possible to prepare for the SSB Interview, Only in a condition when you have complete knowledge about the interview process and its process etc. The Aditya Rana Family is from defence and they were there to guide him better. For a person who does not belong to the defence family, It is very important for them to join the SSB Training Institute at least once to get complete detailed information about the Interview and its preparation tricks etc.

One should always join the academy where the Ex-Interviewers are for the training. A teacher with just the knowledge of the Interview can not train you for this Interview. You must get trained under the guidance of the Officers and Ex-SSB Interviewers. All the best to all the candidates who are preparing for the upcoming NDA Examination and We hope that you would prepare better and will clear the selection phase.

This blog was all about the NDA Topper AIR 1 2/2020, Aditya Rana Singh Going To Be The First 4th Generation Officer. I hope you got the complete details about this. To prepare for the Defence Exam, you can join the Cadets Point Defence Academy and get proper education and training about the exam, Interviews, Physical Fitness and Medical Fitness etc. You can check the official website www.cadetspointdefenceacademy.com to get details or to know more about the Institute. NDA Topper AIR-1 2/2020

What is Regiment in the Indian Army and its type?