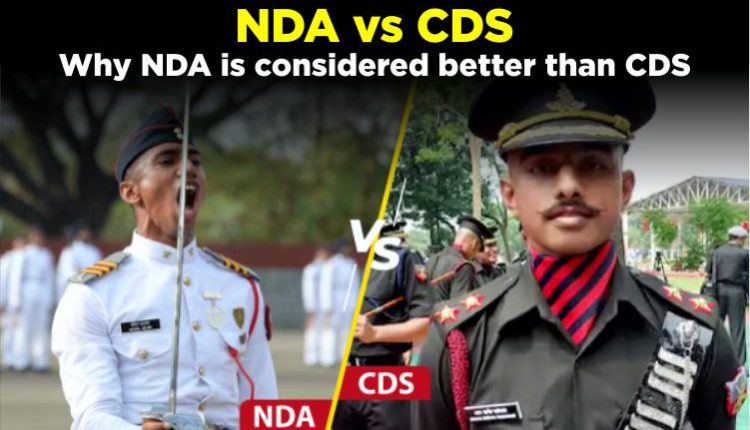 NDA vs CDS: Why NDA is considered better than CDS

There are many ways to join the Indian Armed Forces. Here in this article, we will talk about the NDA Entry vs CDS Entry etc. We will get to know which is better to join and why. To get complete information about this, One must check the complete article below:

One must have the Idea that the NDA is after the 12th while the CDS is after graduation. There is a huge difference between the NDA vs CDS. The NDA is an Academy that stands for National Defence Academy while the CDS is the only conducting body, it stands for Combined Defence Examination. Still, if you are passionate about joining defence, this article will help you in finding a better option for you. Let’s Discuss them One by One and understand each side of them both.

Both exams have a different pattern and also the eligibility criteria are very different from each other. The NDA Stands for National Defence Academy which is a separate academy for the training of the cadets while the CDS stands for Combined Defence Academy which is the name of the exam. After cleaning the CDS Exam, one will proceed to their respected academies for the training like Indian Military Academy, Airforce Academy, Naval Academy etc. While after the selection in the NDA, one will get trained at the National Defence Academy for three years.

But the both NDA, as well as the CDS Written Exam, is conducted by the same body UPSC (www.upsc.gov.in). Let’s see the details about each NDA vs CDS entry individually:

This exam is held twice a year and conducted by UPSE which is Union Public Service Commission. You can apply for this right after your 12th. While in CDS it’s not the same. It is different NDA vs CDS

After you clear all these tests. You will join the National defence academy as a cadet for 3 years. After that, you will be sent to your respected wings Indian Army, Indian Navy or Indian Air Force for 2 years of training. You will be sent to the Indian Military Academy, Indian Naval Academy or Indian Air Force Academy. That would also matter to your performance in the academy in the last 3 years. You will have to score well in the academy to get your desired wings. Now let’s see the details about the CDS and its required eligibility criteria as well as the Selection Process etc.

CDS 1 2022 Notification Out, Check the Details and Apply Online

There are some similarities between NDA and CDS like the Selection procedure is the same but the eligibility criteria and age limit are very different. After clearing the CDSE you will be directly sent to your respected wings Indian Military Academy (IMA), Indian Naval Academy (INA)or Indian Air Force Academy(AFA) for 2 years of training. Which academy you are going to join would completely depend on your score on the written test and SSB interview. Now, let’s see the details about the Eligibility Criteria and Age Limit requirement for this.

This is the complete difference between the NDA vs CDS in terms of Eligibility Criteria, Selection Process and Age Limit Criteria. Now let’s see the overall which is better to join.

NDA vs CDS Which is a better and why NDA is considered better than CDS:

Look, both academies are best in their own place. But if you defence aspirants decided to join the defence, I would suggest you join NDA because competition is less and if you will get selected in the NDA. You would have no worries about college or life after college. You may miss your college life but it is gonna be amazing. You will be just settled after college. Which is one of the best things and tension free.

nd best thing is you will not have to run in the rat race as usually everybody starts preparing after graduation. CDS is not bad if you cannot qualify for NDA anyhow. You can prepare for the CDS after graduation. Everything is the same in both but the training period is different. While in NDA you will be trained for 3+2 years. It is completely up to you to decide which is better and which one to choose. Both are the same only the qualifications and eligibility are different. I hope this was helpful to you.

FAQs For NDA vs CDS

What is the women’s selection process in the CDS?

There is no difference has been made in the men’s and women’s selection procedure. It is going to be the completely same. One has to clear three rounds of selection.

The Written Exam of NDA is conducted Offline by the Union Public Service Commission.

Does one get a stipend during the training at NDA?

No, but all the expenses of cadets are taken care of by the academy. After the completion of the three years of training and one will become eligible for the stipend.