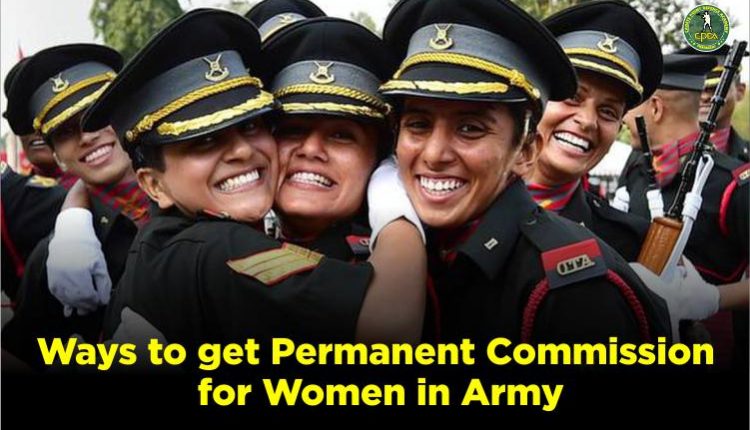 Ways to get Permanent Commission for Women in Army

Earlier the women were allowed to join the service as Permanent commission. But recently, some changes have been made to this. Here in this article, we will get to know the Permanent Commission for Women in the Indian Army Service. Check the article below to get complete information about this.

Permanent commission in Indian Army, where you can work for the nation till the retirement, till 60 years of age, as a soldier or as an officer. In the Indian army, women can join the service as Short Service Commission (SSC) which is basically time-bound of 8-10 years and can be extended for 1-2 years more. But the new government has decided to give Permanent Commission to the women also. Here are further details:

Permanent Commission for Women in the Indian Army:

The earlier permanent commission was not open for the women in Army, women can join the service as Short Service commission only, but according to the recent news, now the women can also join the Army as Permanent Commission.

The Army adjutant general said that the women will be inducted as permanent commission in those 10 streams which are selected for the women. After the 2-3 years of service, She will have to choose a stream for the permanent commission whichever she chooses she would be given training for this. Earlier women were given Permanent Commission for Judges Advocate general and Army education corps only and the other 8 branches are:

How Can a Women Join the Army as Permanent Commission?

There are many ways for men to join the Indian Army as an officer or as a soldier like NDA, CDS, TES, NCC special entry etc. but only a few selected ways are there for women to join the service.

You can appear for the Combined defence service examination after graduation from OTA which is an Officers training academy, by this women can join the service.

Well, A candidate must have a very good eye eight if applying for any critical higher grade position in the service like front line soldiers, pilots Snipers etc.

To apply for this entry, Candidates should have an engineering degree with 60% marks. and Only unmarried candidates are eligible only and their age should be between 20-27 yrs old.

The vacancy is released almost every year. A candidate can check the official website of the Indian Army to get the latest details.

The candidate should have an LLB degree with a minimum of 55% marks. candidate age must be between 21 to 27 yrs old. This is basically a judicial service in the Indian Army. The Selection is based on the performance in the Service Selection Board Interview.

Apart from the above mainstream entries, there are few other entries like Army Medical Corps, Army Education Corps and Military Nursing Service which inducts women on a direct entry basis depending on the availability and requirement.

There is no discrimination in the Indian Army regarding gender. All are the same, it all depends on the calibre and capability of the candidates. There is no relaxation in training for men or women. For further details, keep checking the website.

These are the ways to get permanent commission in the service. Well, there are no changes in the selection procedure, it will be completely the same. So make sure to prepare all the ways better to clear the selection stages and beat the competition.

FAQs For Permanent Commission For Women In Army

Can A women become an officer in the Indian Army?

Yes, there is discrimination regarding gender in the Indian Army Service. Everyone who is eligible can apply for the post of Officer in the Service.

How can a woman join Army after the 12th?

What is the age limit to become an officer in Army?

Well, One can apply for Officer’s entry after 16 years of age but will become an officer at the minimum age of 21 years old.

How to Join NSG as a Commando

What is the Technical Graduate Course Entry in the Indian Army