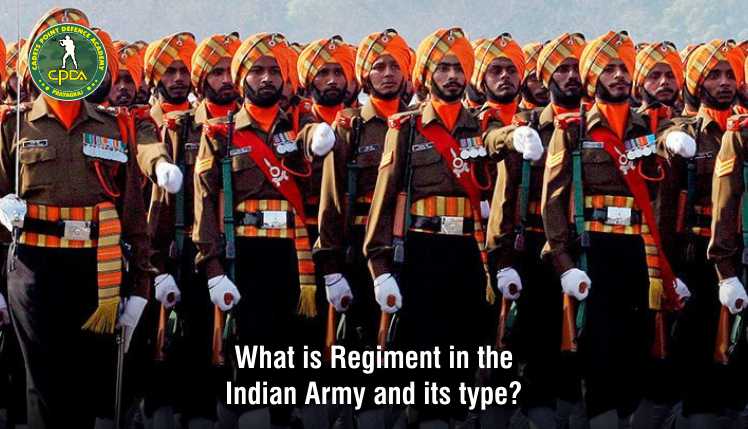 What is Regiment in the Indian Army and its type?

What is Regiment in the Indian Army:

A regiment is basically a military unit. In this article, we are going to discuss what is regiments and the types of regiments in the Indian army and how many soldiers are in the one Regiments. a large number of front line soldiers are basically denoted as regiments. And in our country this also depends on the regions, where you belong to, like people from the hilly area are called as Gorkha Regiments etc. now we will discuss the regiments are there in Indian Army.

Types of regiments in the Indian Army:

The third-largest army in the world is the Indian Army. It has around 1.3 million Para military personnel’s, 2.1 million reserve personnel and approx 1.4 million active soldiers.  India has many regiments. The Indian Army has given names of regiments as per their way of attacking and overall capacity. It is hard to mention the name of every regiment in the Indian Army. Here are the names of few famous regiments that are active in the service:

Bihar Regiments: The Bihar Regiments is infantry Regiments of the Indian Army. It was formed in 1941 by the British. And they are raised as Bihari Battalions by the Mir Kasim. Under the guidance of Mir Kasim, They fought against the Britishers. They are not only excellent soldiers, but also they are quick learners and apply tactical drills with initiative.

Parachute Regiments: This is an Airborne Regiment infantry and special force Regiments in the Indian Army. This regiment was also formed by the British in the year in 1941. And their motto is Conqueror. They are not only trained soldiers also they are very intelligent about their work. They always work as a team.

Punjab Regiments: This regiment is one of the oldest Regiments and most senior regional infantry in the Indian Army. It was formed in the year 1947by the British. During the participation soldier from the Punjab Regiments has given to Pakistan. And the rest of the soldiers were in India. and now this Regiments has soldier from the North-East and consists Dogras and Sikhs but in exception, it has also some soldiers from another caste also.

Rajput Regiments: The Rajput Regiment is an infantry regiment of the Indian Army. It is composed primarily of troops from the Rajput, Bengali, Dogra, Ahir, Brahmin, Gurjar, Jat, Muslim, and Sikh communities. During the 2nd World War, the class composition of the regiment was 50% Rajput and 50% Muslim.

Garhwal rifle: This Regiment is the most decorated infantry regiment of the Indian Army. It was originally raised by the Bengal Army in 1887, after the independence they are serving for the nation under the guidance of the Indian Army.

Brigade of guard
This Regiment is a mechanized infantry regiment of the Indian Army. It was raised as the first “All India” “All Class” infantry Regiment of the army where all the troops from all parts of Indian work together. This is one of the best regiments has ever made by the Indian army for working together for the nation without any caste, community and religion.

How to Join the Indian Army After Graduation

How many Soldiers in one Regiment:

The number of soldiers depends on the situation of the place where they are on duty but normally each regiment has approx 1200-1800 soldiers in each regiment. Indian Army also keeps changing its soldiers from the regiments for better security, and the soldiers from each regiment are highly trained, then to they train themselves every day.  They can’t take risks for the nation because of their training.

This blog was all about the regiments. I hope you got the complete details about this. To prepare for the Defence Exam, you can join the Cadets Point Defence Academy and get proper education and training about the exam, Interviews, Physical Fitness and Medical Fitness etc. You can check the official website www.cadetspointdefenceacademy.com to get details or to know more about the Institute.